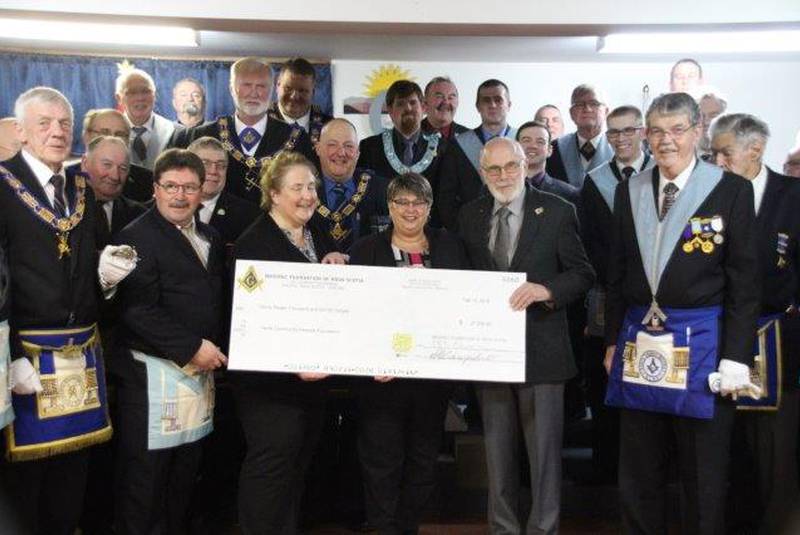 WINDSOR, N.S. – The Masonic Lodges of Hants County have made a $27,000 contribution to the Hants Community Hospital Foundation so they can replace aging laboratory equipment.

The new centrifuge will replace aging infrastructure that was beyond its life expectancy.

The cheque was presented on March 19, 2018 at the community hall in Three Mile Plains, with a large crowd of Freemasons and other community members present.

The masonic lodges in Hants County were given a list of needs by the Hospital Foundation and the centrifuge equipment was identified as a critical piece of equipment needing replacing.

“Charity is a cornerstone of the Freemason’s way of life and for many years was evidenced in Windsor with the presence of the Freemasons Home that once stood where the current Victory Credit Union is now located,” the press release said. “As time passed levels of care became more extensive, the cost of upgrading became prohibitive and consequently it was deemed that the facility should be closed and the funds generated from the sale of the property, along with the remaining funds in the trust associated with the home, be consolidated in the Masonic Foundation and utilized in supporting benevolent work throughout Nova Scotia.”

This decision resulted in enabling the Masonic Foundation, in conjunction with the various lodges in communities throughout Nova Scotia, to make significant contributions to charitable causes.

Andy Kirk, chairperson of the Hants Community Hospital Foundation said the donation from the Masonic Lodges may be one of the largest donations they’ve ever received from another community group.

“The directors at the foundation were elated,” Kirk said. “Every year we receive a list of equipment that the hospital would like to see the foundation and other organizations provide. That would be equipment that isn’t provided through funding from the provincial government or the Nova Scotia Health Authority.”

Kirk said there were four things at the top of a ‘hospital wish list’ – including the centrifuge that the Masonic Lodges purchased – and all four are now paid for; either through the foundation itself or other groups, like the hospital auxiliary.

Other items that have also been purchased this year include a portable bedside ultrasound, Geri Chair recliners and vital sign monitors.

“Not only was (the centrifuge) at the end of its life, it was also impossible to get parts to repair it in the short term,” he said. “The lab is so busy, there’s a sitting lineup of people all the time, it has to be one of the most used parts of the hospital on a daily basis.”

The next big piece the foundation is looking to purchase for the hospital is ENT (eyes, nose and throat) specialty and surgical equipment, which is expected to cost up to $50,000.

Kirk said they’re hoping to raise a significant amount towards that through their charity golf tournament this July.

Correction – A previous version said the cheque presentation was at the Welsford Lodge No. 26 in Windsor, it was actually at the community hall in Three Mile Plains.