It’s difficult for a self – proclaimed geek like me to admit that I knew very little about the character Black Panther before seeing the movie. He was in my mind always somewhat of an enigma. I knew about his suit, that he was from a place called Wakanda somewhere in Africa, and that Wakanda was the source for the strongest metal on the face of the Earth in the Marvel comics, Vibranium. I know that Captain America’s shield is made from Vibranium. I had seen him appear alongside Captain America, The Fantastic Four, and Spider-Man in the comics, as well as make an appearance in Captain America:Civil War, but I knew very little otherwise. The movie is fantastic, and there was a particular sequence that was repeated which stood out for me. Caution: Spoilers Ahead.

Following his Father T’Chaka’s death, his son T’Challa returns to Wakanda to assume the throne. Part of the coronation ceremony requires that if challenged, the heir apparent must fight in ritual combat for the crown. One chieftain, M’Baku, challenges T’Challa. T’Challa ends up defeating him and gets him to yield rather than die. After this, T’Challa undergoes the King Making Ceremony in which he ingests what’s called the Heart Shaped Herb, and he is buried. T’Challa visits The Djalia, which is the mystical realm where his ancestors go after death. T’Challa meets his Father here, and they converse briefly before T’Challa resurrects from his burial, changed into the Black Panther.

Later, after Killmonger reveals himself to be T’Challa’s cousin, and heir to the throne, he defeats T’Challa and hurls him over a waterfall. Killmonger then ingests the heart shaped herb, and orders the rest to be destroyed. Luckily, one is saved which plays an important part in the film. Killmonger undergoes the same ceremony, being ritually buried and then visiting Djalia. After having a vision of his Father, he resurrects as King of Wakanda, and dons his own Black Panther suit.

We find out later that M’Baku has saved T’Challa as a repayment of saving his life. T’Challa is given the very last Heart Shaped Herb, and is buried. He again visits Djalia, where he confronts his father regarding why he did not bring his cousin, back to Wakanda after killing his own brother, N’Jobu. He also tells his ancestors that the days of Wakanda hiding from the world is over. T’Challa then resurrects and goes on to fight and defeat Killmonger.

What stood out to me, and hopefully to you as well, is how the “King-Making” ritual in Black Panther parallels what happens to Hiram Abiff in the 3rd degree. Like T’Challa or Killmonger, Hiram undergoes a form of ritualistic combat. In Hiram’s case, it’s not by choice. He is challenged by three ruffians who attempt to get from him the Master’s word, which will allow them Master’s wages and the ability to travel freely. Hiram has promised this only when King Solomon’s temple is completed, however they cannot wait that long. In a parallel, all too familiar to our time now, they want instant gratification. Hiram, being steadfast in his convictions, that the reward will come only after the Temple is completed, pays with his own life.

The ruffians dispose of Hiram in the Temple rubbish, and meet later that evening to secret his body away. They end up burying him east of the Temple, at the foot of Mount Moriah, marking his grave with a Sprig of Acacia. Early the next morning, King Solomon finds the workmen in disarray, as there are no instructions on the trestle board. Fearing something has happened to Hiram, King Solomon dispatches twelve fellow-craft to find him. Three of the fellow-craft find Hiram’s grave and report back to King Solomon. Solomon and his fellow –craft exhume the body, raising it by using the strong grip of a Master Mason and with a phrase.

Taken literally, King Solomon essentially performs Necromancy in raising Hiram from the dead. While this is quite possible, given the legends surrounding the Seal (Ring) of Solomon and his ability to command demons with it, the story is not meant to be taken literally. Instead, it and the sequences in Black Panther share the same motif. That the resurrection which takes place is a spiritual one. In both cases, they undergo a baptism.

Now in a traditional sense, baptism is: a rite or sacrament of dipping a person into water or sprinkling water on him, as a sign of the washing away of sin and of admission into the Christian church. But it also can mean: “any experience that cleanses a person, or introduces him into a new kind of life.” In the case of the Black Panther, the ritual grants him super-human power. He is faster, stronger, tougher and more intelligent than the average individual. In the case of the newly – raised Master Mason, the ritual removes the vestiges of his former life. He is also made anew, as part of the fraternity of Masons, he now must conduct himself as one in all aspects of his life. Much like the Black Panther must defend his kingdom of Wakanda from evil influences and forces, and by using the ballot you can do so. You also must remember to guard yourself. Remember that your every action, word and manner reflects on our Fraternity. Be ever vigilant. Just like the Black Panther.

WB Darin A. Lahners is the Worshipful Master of St. Joseph Lodge No.970 in St. Joseph and a plural member of Ogden Lodge No. 754 (IL), and Homer Lodge No. 199 (IL). He’s a member of the Scottish Rite Valley of Danville, a charter member of the new Illinois Royal Arch Chapter, Admiration Chapter U.D. and is the current Secretary of the Illini High Twelve Club No. 768 in Champaign – Urbana (IL). He is also a member of the Eastern Illinois Council No. 356 Allied Masonic Degrees. When he’s not busy enjoying Masonic fellowship, Darin spends his time as a DM for his children’s D&D campaign, reading, golfing, watching movies and listening to music. 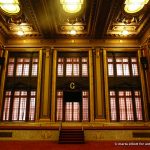 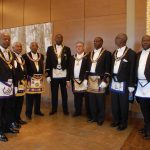 Your password reset link appears to be invalid or expired.

To use social login you have to agree with the storage and handling of your data by this website. %privacy_policy%