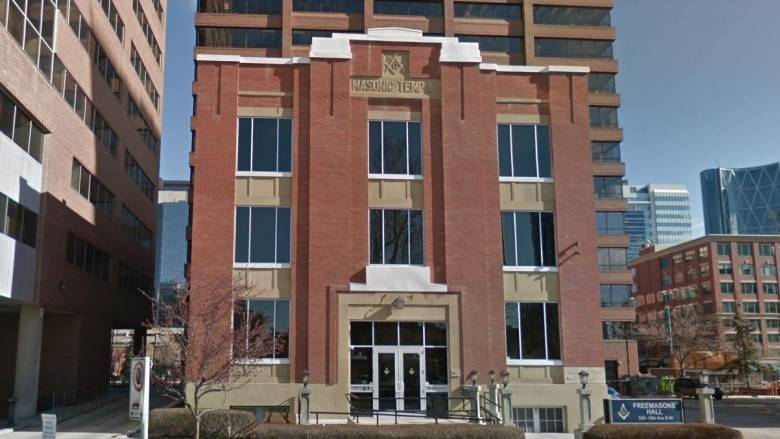 The stewards of a prominent Freemasons hall in downtown Calgary say they’re torn over options to save their beloved lodge.

Both options, a Master Mason says, could result in losing the building.

Instead, the organization wants a promise from the city to reduce its property tax bill, which it says has tripled in a decade to $160,000 by next year.

“Our fraternity has survived and will continue to survive but our fraternity is not the building. The problem is, we were bequeathed this building 90 years ago. We were asked to preserve this site for future generations to come,” Master Mason Ilya Raykhlin said Tuesday.

“At the end of the day, it’s just become unmanageable.”

Freemasons, who have been meeting in the Calgary area since the 1880s, are a fraternity of men who believe in a supreme being.

The organization has earned a reputation as a “secret society” that does charitable works. It’s had prime ministers, mayors and university founders among its members, and relies on donations and membership fees to pay its expenses.

In Calgary, the local Mason group built its joint lodge and temple in 1928, now called Freemasons Hall, at 330 12th Ave. S.W. in downtown. The building has distinct Masonic temple elements and is listed as a historic property.

But the Freemasons are holding off on requesting official city heritage designation, a distinction that would provide some financial benefit — but not the kind they seek.

“If we get heritage status without guarantee of tax exemption, then we can’t sell the building,” Raykhlin said. “Then we literally can’t sell the lot.”

But a senior heritage planner with the City of Calgary said they shouldn’t be so worried about selling the building.

Calgary, unlike many other cities, has very specific heritage bylaws, which the planner said are “pragmatic and flexible” by specifying what part of the building must be maintained if it’s redeveloped.

That means developers can build on heritage designated sites while maintaining the building’s heritage.

“I think that takes a lot of the trepidation away from people,” planner Clint Robertson said.

But the owner must ask for the designation.

“I think that they should reconsider and explore the option of designation further because there could be significant financial gains [to] help offset rising property tax in a major way,” he said.

Could sell ‘air rights’ to developer

But a heritage designation, Raykhlin noted, won’t “automatically lead to a tax exemption or relief.”

The Freemasons would have to apply to city council for such relief after designation, so that’s why the group feels it’s a risk.

Those options include selling the three-storey building’s so-called air rights to developers wanting to construct tall buildings in the Beltline area. Robertson said there are more buyers than sellers right now for this.

The heritage site owners can apply for grants to help upgrade the aging building, or, again, ask city council for property tax relief.

Raykhlin said that even if they sell air rights or get grants, the tax bill could still rise above their ability to pay.

“If they’re not willing to do their part making sure we can do just that, then what’s the point?” Raykhlin said. “Realistically, the only thing we want the city’s help with is tax relief.”

The city sent a written statement to CBC News from Nelson Karpa, assessment director, who said the city has worked with the Calgary Masonic Hall’s representatives over the years reviewing the tax status of this property.

“We reviewed the public uses of the hall in each of those years and found that the hall doesn’t meet the qualifying criteria for a ‘charitable or benevolent’ tax exemption under Alberta’s Municipal Government Act,” Karpa said in the written statement.

The taxable status has also been confirmed by the Assessment Review Board, the city said.

“The City of Calgary treats its property tax exemption review process very seriously. This is to ensure that only qualifying organizations under the legislation are exempt from taxation; because when taxes are exempted to one taxpayer, that tax burden is shifted to all other taxpayers in our city,” read the statement.

As the Masons look at their options to pay rising bills, Robertson hopes they’re able to save the building.

“It’s a very fine building and it’s got a lot of symbolic value, landmark value, architectural value, and the city is very keen to see the heritage that we have in the Beltline community and other communities retained,” he said.

The lodge is open to the public a day each year as part of Freemasons Day, which Raykhlin organizes.