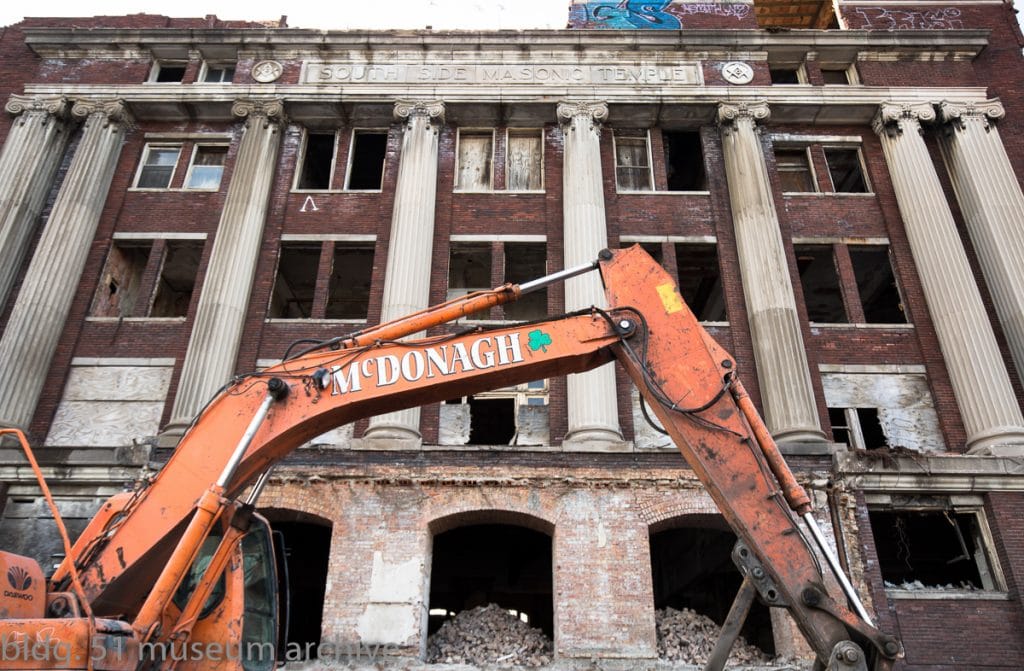 Here are the latest images from clarence hatzfeld’s south side masonic temple demolition. the high reach hasn’t been brought to life yet, but the ball has been swinging against the northeast corner of the building. not sure if the three-sided fluted limestone columns and capitals are going to be saved. the face brick is really nice – none of it is being saved. maybe the city wants it all to go away quickly. I just don’t know at this point. surely there must be others out there documenting the death of this temple. 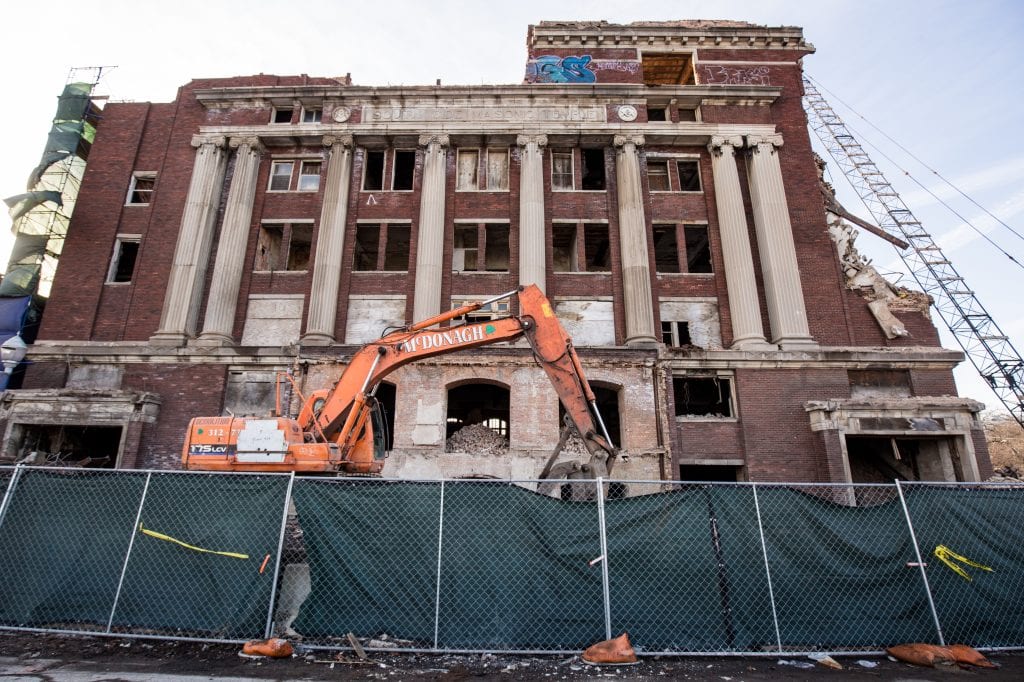 Looking at these immense columns I cant help but reflect on the rise of indiana limestone as this uniform, dull gray stone was not always the favored choice. the local illinois dolomitic limestone from the joliet, lemont, and lockport areas had experienced the final clang of its death knell prior to the time the south side masonic temple was built in 1921, however as a contender in the building industry for many years its contribution is worth reflection as a precursor to indiana limestone. the shift toward indiana limestone becomes apparent when we reflect on the history and characteristics of the local illinois stone. 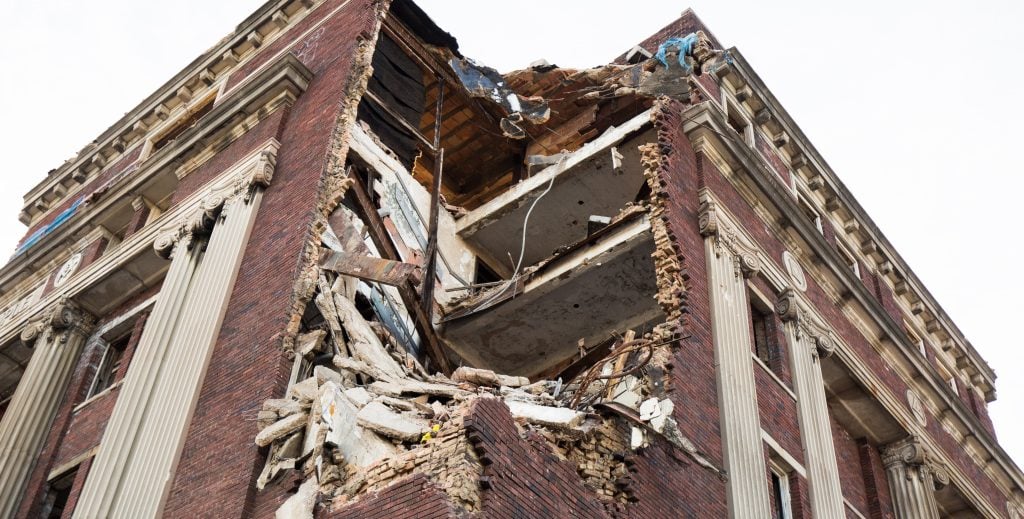 In 1836 when the i&m canal was undergoing construction along the Des Plaines River and workers were digging, they discovered the Niagaran formation dolomite from the area that could be used to line the walls of the canal. the first local quarries were close to the canal and most likely produced material expressly for its construction. before long the straw-colored stone was found to be useful for building, and it was soon being used for foundations, lintels, sills and the like. 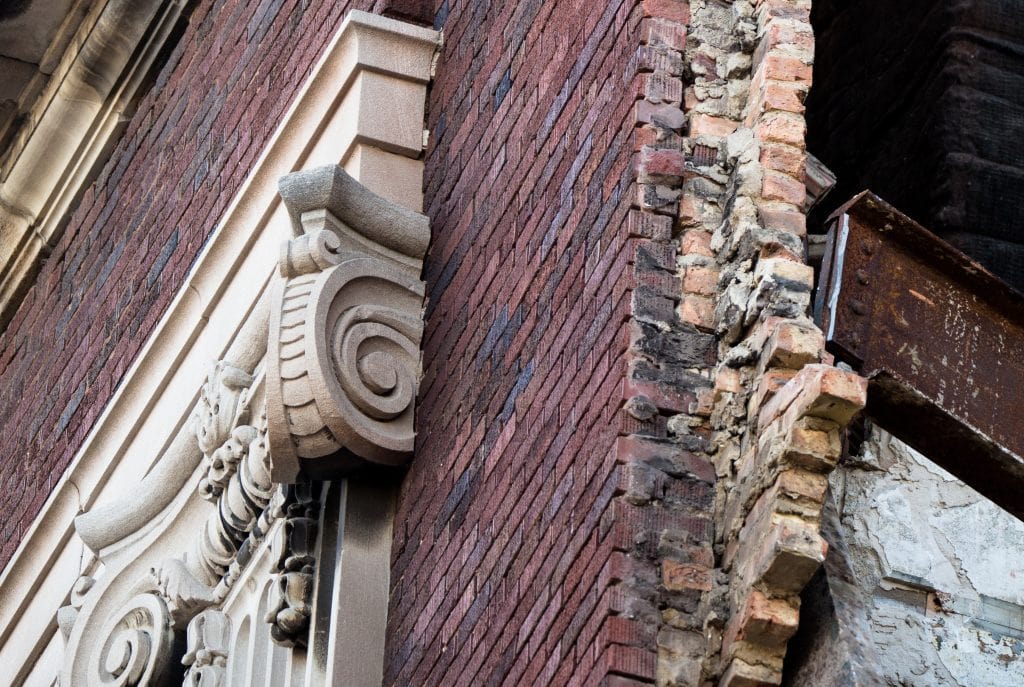 In the 1860s a huge demand for the local Joliet stone erupted with the construction of the rock island arsenal. before long the joliet quarries were unable to meet demand and the lemont quarries began supplying stone for the project. soon after public buildings in illinois, iowa, and wisconsin were being constructed from the stone. as it was cheaper than marble, granite or brownstone, able to be transported by barge or train, and there was ample immigrant labor willing to work in the local quarries it became a dominant building material. 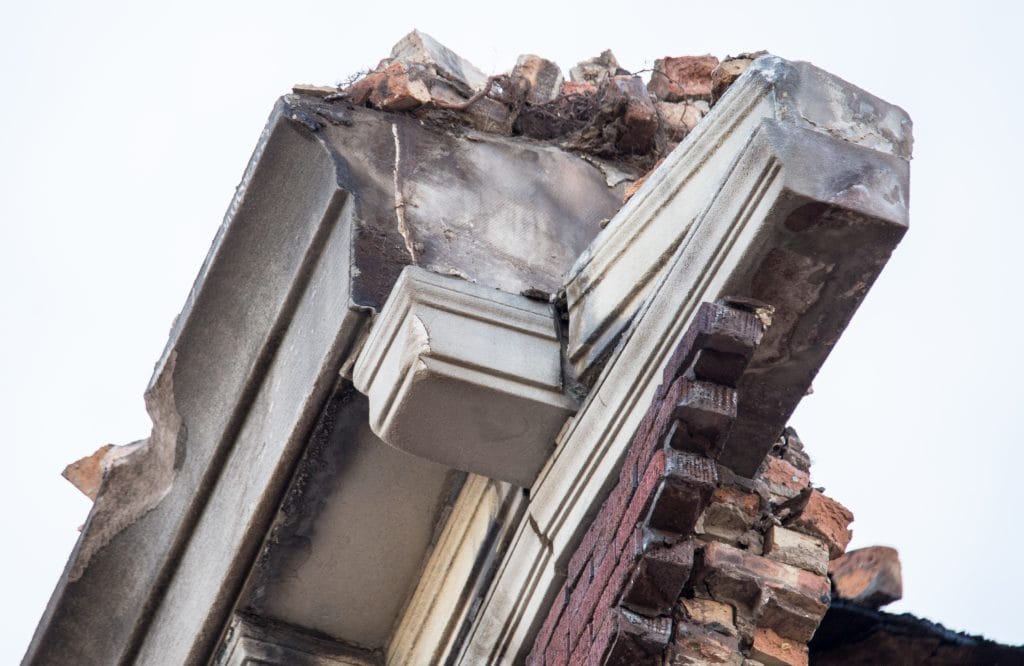 The stone was known by an array of names, some more marketing ploy than truth – Athens marble, sugar run dolomite, and Joliet marble. at the height of its demand, tens of thousands of carloads of Joliet limestone was being shipped all over the country. joliet began marketing itself as the ‘stone city’ and renamed three consecutive streets near the quarry sites along the des Plaines river ‘stone,’ ‘lime,’ and ‘marble’ streets in 1880. ironically, the nascent adoption of Bedford limestone, the stone which would eventually replace Joliet limestone in a near wholesale fashion, had already begun. understanding this transition requires circling back and revisiting some of the drawbacks of the local stone itself. 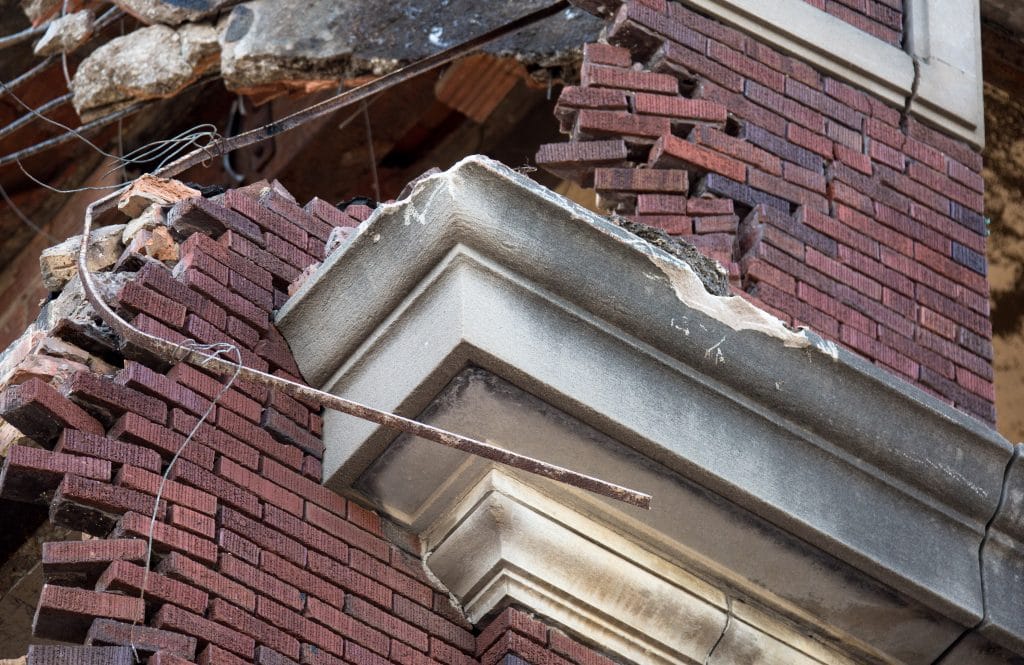 Despite the fact that the local Illinois limestone is a hard stone (harder than Indiana limestone), it could be quarried with less difficulty than Indiana limestone due to its stratified nature. stratified rock can be split easily because it forms in layers, although the divisions into sheets (known as laminations), had to be laid in horizontal courses in the same orientation in which they were naturally found in the quarries. unfortunately, laminations of the local stone were often placed vertically. if the stone was used in a particularly exposed manner such as a projecting course, the weather would invade the joints and result in cracks or outright failures. frost was a particular enemy of Illinois limestone. 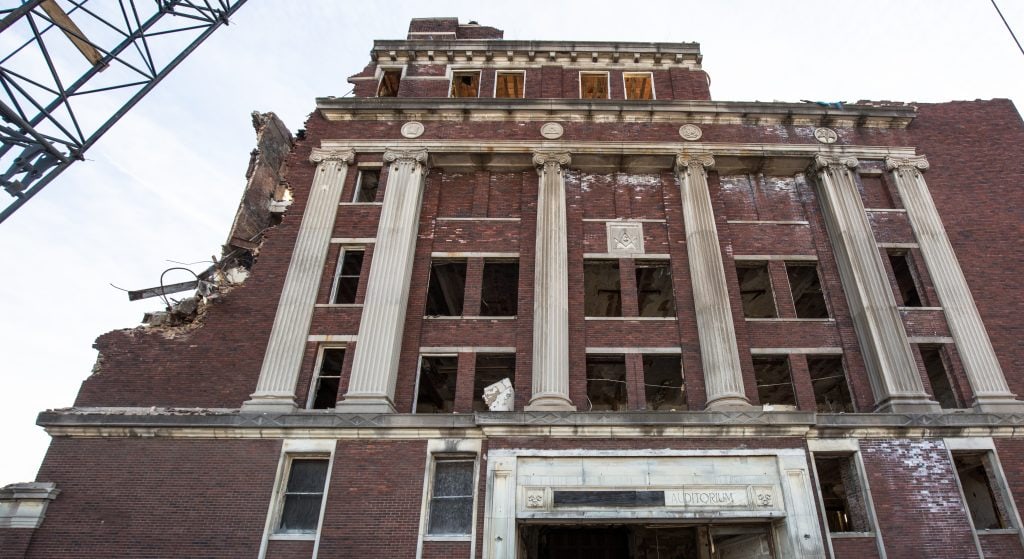 Upon first being quarried the area stone possesses a dull gray appearance. despite being called a limestone it has a magnesium content that makes it a true dolomite. it also has an evenly distributed iron content that oxidizes when its exposed to weather. this exposure results in a staining of the original dull color and it becomes a creamy old ivory or yellow color which is quite beautiful. unfortunately this same iron content continues to erode the surface of the stone perpetually such that it’s always diminishing, although it does provide the effect of always being a clean surface, as can be seen in extant buildings bearing the stone such as the Chicago water tower and pumping station (1869), holy name cathedral (1871), or the St James cathedral (rebuilt after the fire)

Ultimately the usage constraints and natural decay of Illinois sourced limestone proved to be minor deterrents for its continued use compared to other more forceful claims on its longevity. with the invention of modern stone machinery such as the gang saw, stone planer, diamond saw, and pneumatic hammer it became much easier to quarry softer stones such as Indiana limestone. Additionally, the Indiana stone was able to be cut from solid beds, wasn’t layered, and could be cut in huge dimensional blocks that could be laid in any direction in a building. 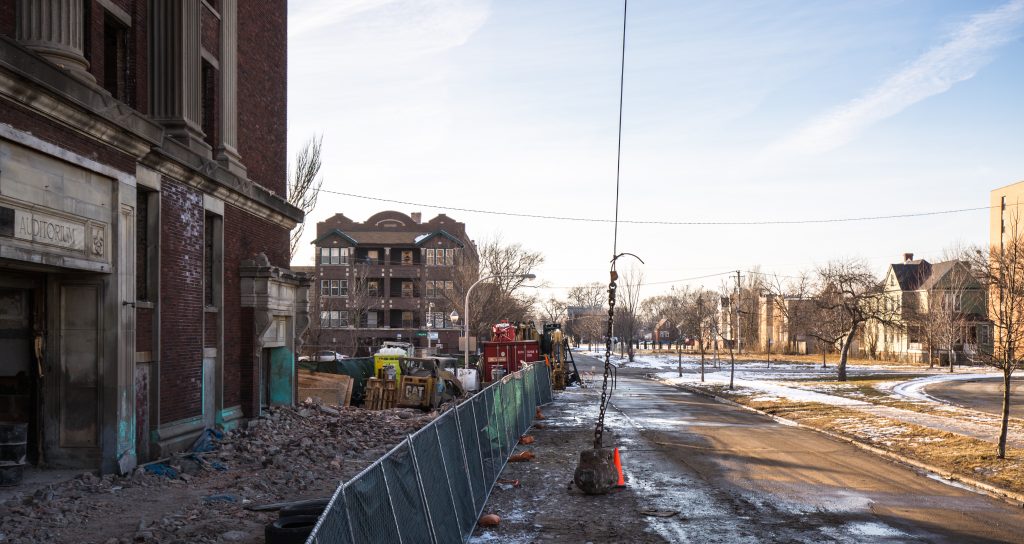 The great Chicago fire also proved a harbinger of Bedford limestone as well. In part 4 of this eight-part series, we’ll examine how the local Joliet limestone continued to fall from favor as events of the time transpired to hasten the adoption of Indiana sourced limestone. Had this transition not occurred these huge tripartite assembled limestone columns and capitals of the south side masonic temple being destroyed today would not have come into being.