From Freemasons to frat houses: The secret societies we know very little about

Our curiosity about the Freemasons and their ilk gives way to conspiracy theories. But if secret societies are as benign as they say, then why the secret? David Barnett looks through the smoke and mirrors – and attempts to join the Illuminati 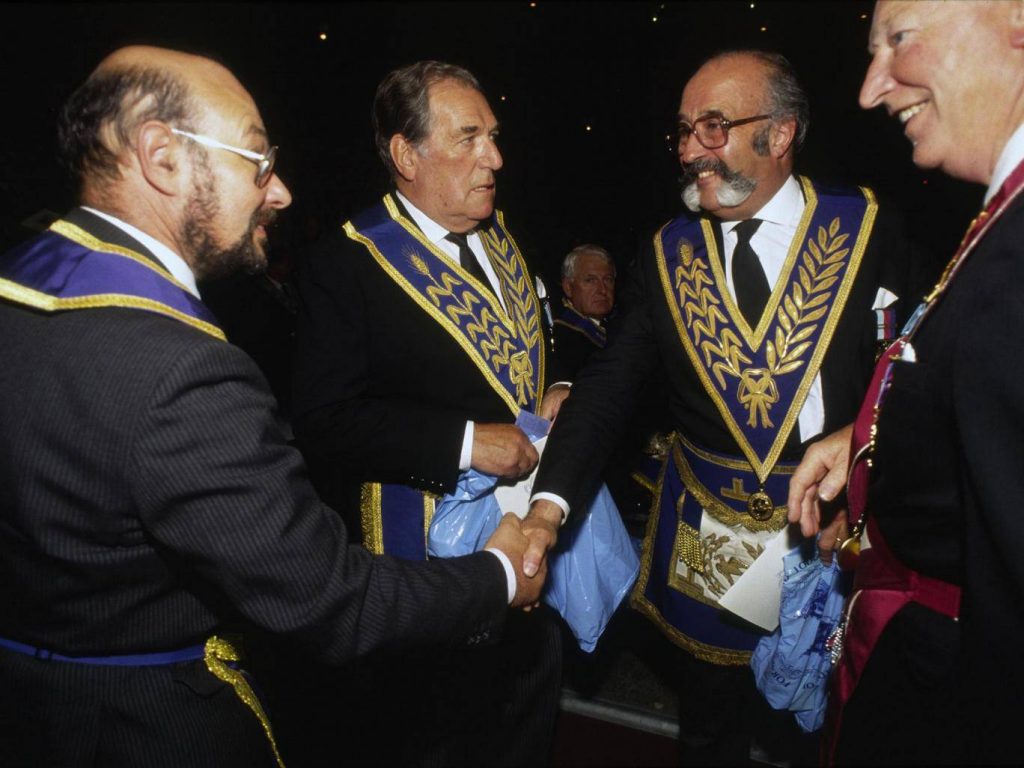 I have only once, I think, been a member of an organisation that excluded someone right before my eyes.

I’m not counting the Cubs in this – I’m not sure if there was a blanket ban on girls joining back in the Seventies, it’s just that there weren’t any girls in my troupe, and I packed it all in after a couple of months because the meetings were on Friday nights and I wanted to watch The Incredible Hulk. Nor am I referring to my lifelong membership of the Straight White Male club, for which I was signed up while still in the womb.

No, I’m talking about the Lower Ince Labour Club junior coarse fishing society. Fishing was a popular pastime when I was a kid, with rod and float on the canal, or the River Douglas, or various flooded quarries or former pit land. I vividly remember the first meeting of the fishing club, when the organiser, almost as an afterthought, checked that our parents were all active members of the Labour Club.

One boy, a couple of years older than me, called Jonathan, said this his parents weren’t. Red-faced and almost in tears, he was asked to leave. He’d just bought a new rod, as well. 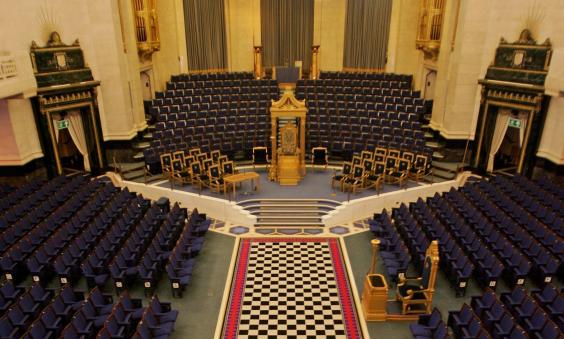 The Grand Temple inside the London Freemasons’ Hall (Getty)

I think it was that experience that gave me a healthy distrust of elitist clubs and societies, so you’ll understand and perhaps forgive me when I break out the world’s smallest violin to accompany the Freemasons’ claim that they are facing discrimination and are being “unfairly stigmatised”.

In fact, they have taken out advertisements in two national newspapers to complain. The papers are The Times and The Telegraph, which is perhaps curious; you might have thought that most Masons would actually be readers of those twin colossi of the British establishment anyway. Surely their complaint would have better avoided preaching to the converted in the centre-straddling or left-wing press?

But anyway; the advert is headlined “Enough Is Enough” and, in a short, impassioned speech signed by Dr David Staples, the chief executive of the United Grand Lodge of England, it sets out the Freemasons’ charitable gestures (£33m raised for good causes last year) and their values (honesty, integrity and service to the community), as well as stating that no other organisation would stand for the sort of discrimination that Freemasons get, and pledging rather darkly: “Nor will we.”

Why do the Freemasons feel so much under the cosh? Perhaps it’s the claim by Steve White, who at the end of December stepped down from his three-year tenure as chair of the Police Federation, and who said that the presence of Freemasons is putting the brakes on policing reform and actively thwarting equality and diversity, particularly in relation to women and ethnic minorities in the force.

Then, last weekend, it was revealed that two Freemasons’ lodges operate within Westminster, populated by MPs and political journalists, prompting angry denials that there was anything actually wrong with this from Dr Staples, and leading to the taking out of those adverts.

Freemasons at Earls Court, London, celebrate the 275th anniversary of the formation of the first Grand Lodge, in 1992 (Rex/Shutterstock)

What do we know about the Freemasons? Secret meetings, funny handshakes, one trouser leg rolled up, murmured assertions that “we meet upon the square and part upon the level”. But it’s not about that, of course. It’s about the benefits conferred by membership, and that’s what makes us non-members somewhat suspicious. If it’s all so benign and innocent, why the secrecy? Are Masons, as has long been presumed, doing each other favours in business, in public life, in private? How far does their influence reach? Are we losing out, at work, in our communities and even in our dealings with authority and the police, because there’s a lot of mutual back-scratching going on to which we’re not invited?

In 1988 Michael Baigent and Richard Leigh published their book The Temple and the Lodge, which subsequently became an international bestseller for its claim to lift the lid on the fascinating world of Freemasonry. In this and their previous book, The Holy Blood and the Holy Grail, they directly traced the lineage of the Freemasons to the Knights Templar, the Christian order established in 1139 which rapidly grew to great power and influence across Europe.

In their introduction to The Temple and The Lodge, Baigent and Leigh acknowledge the strong foothold that Freemasonry has in the popular psyche: “Is Freemasonry corrupt? Is it – even more sinisterly – a vast international conspiracy dedicated to some obscure (and, if secrecy is a barometer for villainy) nefarious end? Is it a conduit for perks, favours, influence and power-broking in the heart of such institutions as the City and the police?”

Is it? We don’t know, because by its very nature the Freemasons is a secretive organisation. Secret societies, of one form or another, have been prevalent – or at least the idea of them has – for centuries. Sometimes that can manifest in our daily lives, in tribes or gangs, or office cliques, or even close-knit friendship circles, with their in-jokes and references which are opaque and obscure to those not in the know.

Fascination with Freemasonry has allowed the idea of conspiracies to take hold, from the allegedly globe-spanning Illuminati to the shadowy Bilderberg Group of the world’s political elite, to the fraternities of American colleges with their “hazing” initiation rituals.

Kappa Alpha Order is one of the most venerable of the US frat houses, formed in 1865 at Washington College in Lexington, Virginia, and widely active across the country today. Kappa Alpha has been criticised for its embracing of America’s racist past through Confederate trappings and has been widely acknowledged to be closely aligned to Freemasonry in imagery and organisation.

Peter (not his real name) is British but as a student attended for a year a college in a liberal enclave of a southern US state, and was inducted into Kappa Alpha (KA). After considering three or four fraternities at the open-house events and “cook outs” they organised to attract new members, he plumped for KA as it was “the only ethnically diverse bunch who were also really chilled and up for good fun”. 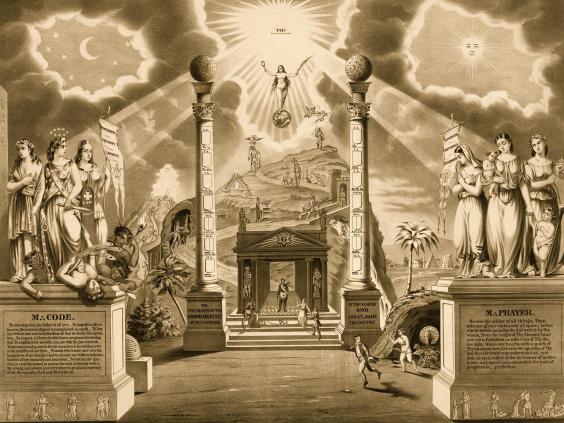 Peter asked about the hazing and whether his chapter operated “the shake” – when prospective members are all but kidnapped and bundled into cars to be taken to the secret initiation process. So what actually happened at his initiation?

“I cannot go into specifics,” he says, “partly out of respect for my chapter if not for the frat as a whole. Also it is immensely complicated.

“Like Freemasonry, on which it and many others are based on, religion is integral – For KA it is a Christian brotherhood.

“You are informed of some higher secret truths – just as vague as those Pierre Bezukhov finds out in War and Peace. You are blindfolded and walked around campus to disorientate you then led into the college’s chapel. You go through a ritual including kneeling, being knighted, awarded spurs, kissing the bible and given olive leaves. Cloaks are worn, but no hoods.

“Honestly it felt pretty ridiculous  – it made me take the whole thing a lot less seriously. And from then on I treated it as the drinking club it was that also ran sports teams, charity events and social events with sororities.”

But once a member, Peter slowly noticed how “people get the cold shoulder for being liabilities, not up to an arbitrary moral standard, intelligence and general congeniality”. That said, “bad treatment of women was a massive no-no with the brothers – the motto is ‘Le Deux et les dames’ (God and the ladies).”

Was there any suggestion of supporting racism? “It might seem odd but 10 years ago, Robert E Lee who is the spiritual founder of the frat, was seen as the ideal of southern gentleman values without the tinge of overt racism. My chapter never did the dressing up as Confederate soldiers but we did drink mint juleps, sing a KA version of “Dixie” and do Gone With The Winddrinking games. A majorly Democrat chapter – we enjoyed the southern vibe however problematic.”

Peter stayed as an active member of KA throughout his year in the States and is now an alumni brother, still in contact with some of the friends he made there. But he does now ponder that societies such as this can become “quite dangerous”, as echo chambers where certain thoughts and actions can be “easily excused and escalated”.

Even a decade later, and far from the place where he spent a year with Kappa Alpha, Peter is unwilling to talk specifics about, for example, his initiation. The bonds forged in societies such as this are strong and last a long time. Is it any wonder that people view the Freemasons with a measure of suspicion? 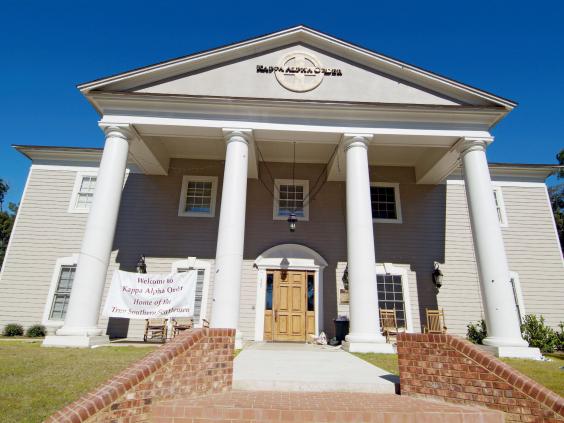 The open letter placed by the Freemasons in the Times and Telegraph ends with the phrase “we’re open”, a buzzword repeated on the website of the United Grand Lodge of England. On their “Becoming a Freemason” page, four white men share a drink in a pub, driving home the message of belonging and support.

“Any man over the age of 21 may join regardless of ethnic group, political views, economic standing or religion, although he is expected to have a faith,” says the page. The next step – if you don’t already know someone in your local lodge – is to approach the Freemasons on their contact page and they’ll put you in touch.

Which seems straightforward enough. Out of interest, I googled “Illuminati”, to find out if it did the same. You’ll be hard-pressed to find someone who’ll admit they’re a member of this particular group, and it’s a toss-up whether it exists at all. The organisation is perhaps most famous for appearing in The Illuminatus! Trilogy by Robert Shea and Robert Anton Wilson in the 1970s, positing a world-spanning conspiracy that stretches back through history, taking in copious amounts of sex, drugs and magic.

But surprisingly, it does have a website, and even a Beverly Hills based PR company, Lirim, “specialising in image management, branding and global marketing strategies for religious and governmental heads of state”.

So I dropped Lirim a quick email: “I got your email address from the website of the Illuminati. I was a bit surprised they had a website, being what I thought was a shadowy international conspiracy, but I suppose everyone has to get with the times.

“I’m a journalist and writer in the UK. I’m writing to ask if you can let me know how to join the Illuminati. Is there a membership cost, ie monthly subs? I would like to know if there’s any kind of initiation rituals, as I am scared of heights, but pretty much anything else goes. Also, can you let me know if all that stuff in the Robert Anton Wilson/Robert Shea books was true?

“Thanks in advance, look forward to hearing back from you and signing up!”

I also contacted the Bilderberg Group, which also has what appears to be a website: “I’m a journalist and writer in the UK and am interested in joining the Bilderberg Group. Can you let me know about application requirements, membership benefits, and how I go about joining up?”

Curiously, at the time of writing, I’m yet to hear back from either of them. Maybe they know too much about me already. If only I’d stuck it out at the fishing club.