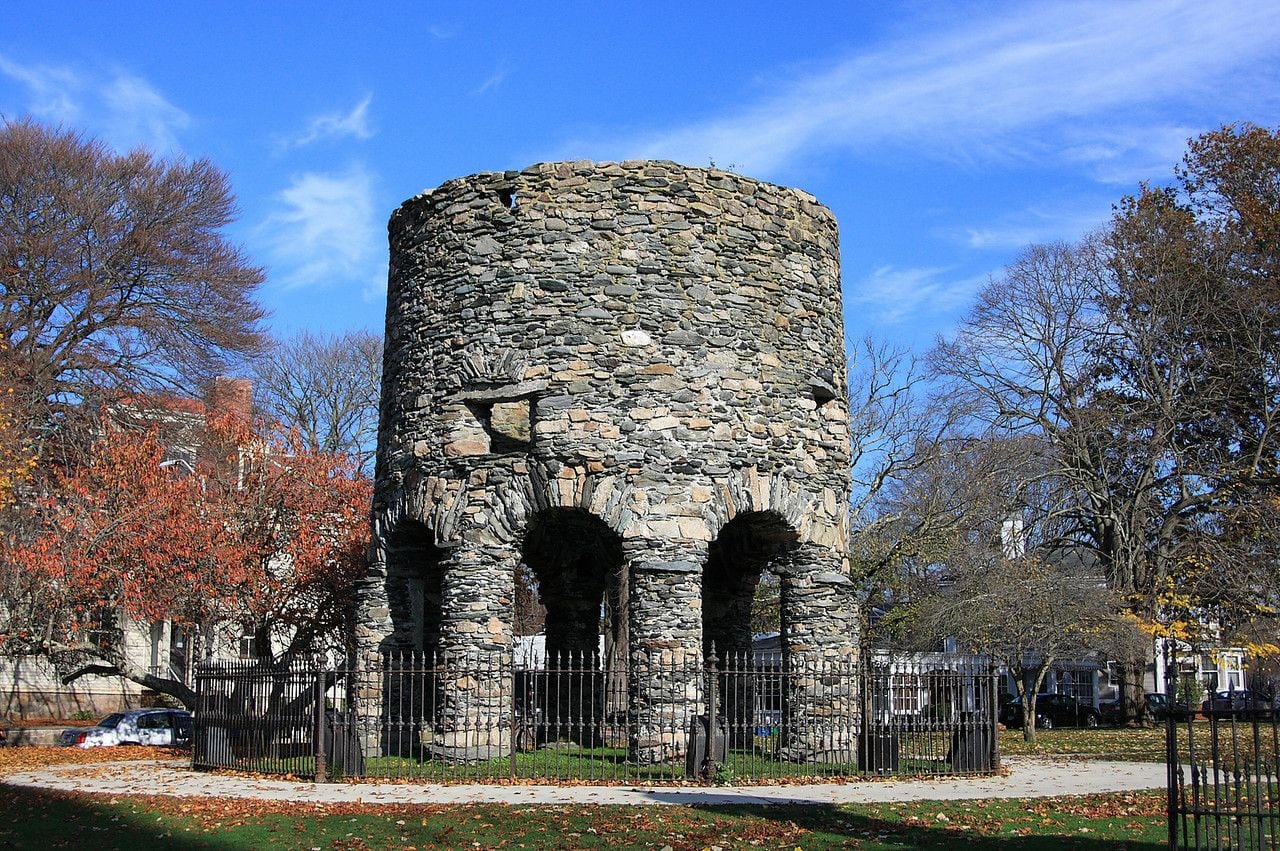 Situated in Touro Park in Newport, Rhode Island, the structure referred to as the “Old Stone Mill” or more simply “The Newport Tower” has been a source of mystery, contention and debate for more than a few centuries. The Tower is seemingly older than the town, which was incorporated in 1639, and it was in ruins even in early Colonial times. Various theories have attempted to explain the origin and purpose of the Tower. The most common explanation is that what we see there is the remains of a 17th Century Colonial windmill. It has also been suggested that the Tower is several hundred years older and was constructed by the Vikings during one of their transatlantic voyages. Many additional conjectures, some more plausible than others, have been offered as well. All things considered, the true origin of the Tower remains unknown.

I first encountered the Newport Tower in 2016. I was working on a series of portraits inspired by 19th Century “Gilded Age” historical figures and had traveled to Newport for a week to do research at the famously extravagant Newport Mansions. I had booked a room at the Hotel Viking on Bellevue Avenue, just around the corner from Touro Park. While out walking on my second morning there, I saw the Tower and was fascinated by how starkly it stood out from it’s surroundings. It is a medieval-style stone structure in the midst of 18th and 19th Century wooden buildings. There was very little information about the Tower in the park itself, so I undertook some cursory research on my own. Looking further, I became overwhelmed with the many conflicting theories regarding who constructed the Tower and why. Some of the ideas were very far-fetched, and I immediately saw how the subject might be considered poison to mainstream academic historians. However, I noted two carefully conceived theories, both equally interesting and no less controversial, which have become topics of interest for Masonic studies and lectures in recent years.

Several authors, including Tim Wallace-Murphy, David S. Brody and Scott Wolter have theorized that the Tower was constructed in 1398 by Scottish nobleman Prince Henry Sinclair, 1st Earl of Orkney (1345-1400?). The scenario suggests that Sinclair, along with remnants of the Knights Templar, used an old Viking map to island hop across the North Atlantic. They made landfall in present day Nova Scotia and journeyed down the east coast. In the area of what is now the town of Westford in Massachusetts, one of the party died and was memorialized by a carved effigy on a nearby rock ledge. This carving, of which only the sword is visible now, is commonly referred to as the “Westford Knight.” Sinclair then ventured further south and constructed the Tower to serve as a multi-purpose monument, observatory and navigational beacon overlooking Narragansett Bay. Henry Sinclair’s grandson, William Sinclair, further memorialized the Pre-Columbian voyage in the cryptic carvings of Rosslyn Chapel in Scotland half a century later. Much of the foundation of this theory relates to the style of stonework construction used in building the Newport Tower, which is strikingly reminiscent of structures still standing in Henry Sinclair’s homeland of the Orkney Islands. It also has simlarities to the many “round” buildings known to be constructed by the Templars. Freemasons in Rhode Island are naturally intrigued by this possible Templar connection and at least one Commandery incorporated the Newport Tower into the design of their pocket jewel. I’m sure the Brethren at the Grand Lodge of Rhode Island have valuable information on the subject as well.

Taking a different view, the work of researcher Jim Egan argues that the Tower was constructed in 1583, based on the design and specifications of Dr. John Dee (1527-1609). John Dee was an all-around Renaissance Man. In addition to being a mathematician, astronomer, astrologer, alchemist and Hermetic philosopher, he was also a key advisor to Queen Elizabeth I. Egan’s theory maintains that the Tower’s rough stonework was originally covered in plaster (some of which is still visible) and various decorative ornaments. It served as a testament to the Enlightenment and was intended to be a welcoming monument for the first great Elizabethan colony in America. Wars, interior conflicts and other circumstances in England took priority, however, and the Tower was abandoned and forgotten when full colonization became delayed. Egan states that the Tower is in fact a horologium, a building that keeps track of time, and he has demonstrated various precise solar and lunar alignments which happen through the Tower’s windows every year like clockwork. He further states that the mathematical proportions of the Tower are based on John Dee’s well-known “Monas Hieroglyphica” symbol. In addition to the astronomical and numerical elements, his theory is further evidenced in old maps, which refer to present day Narragansett Bay as the “John Dee River.” Freemasons and other Esoteric minded individuals are now flocking to the Tower each year on the summer and winter solstices to see the impressive illuminations.

Two different theories, four authors mentioned. As I understand, David S. Brody, Scott Wolter, Tim Wallace-Murphy and Jim Egan are all available for presentations at Masonic Lodges if you’re interested in learning more (Wolter and Wallace-Murphy are Masons, Brody and Egan are not). I’ve just summarized their findings here, obviously, and I’m sure I’ve left out some of what they consider to be the decisive points in their arguments. I’ve purposely avoided offering my opinion (for that’s all it is) of the origin of the Newport Tower, instead just briefly pointing out the basics of these two ideas, trusting that readers will look for further information and reach their own conclusions… perhaps even discover new evidence to support an entirely different theory regarding this fascinating and enduring mystery. – TS Travis Simpkins is a freelance artist with clients throughout the United States and Europe. He currently works on projects for the Supreme Council, 33°, NMJ in Lexington, Massachusetts. He also serves as a portrait artist for the Grand Lodge of Massachusetts, Grand Lodge of New Jersey and other jurisdictions across North America. His artwork is in many esteemed collections, including the Harry S. Truman Presidential Library & Museum in Independence, Missouri. Bro. Simpkins is a member of Morning Star Lodge A.F. & A.M. in Worcester, Massachusetts. He is a 32° Mason in the Ancient Accepted Scottish Rite- Valleys of Worcester and Boston. He is also a member of Eureka Royal Arch Chapter, Hiram Council of Royal & Select Master Masons and Worcester County Commandery No. 5, Knights Templar.